LG CX Vs C1 OLED TV | Which OLED TV Should You Buy?

Victor Smith
Victor loves talking about Tech and he reviews a lot of gadget. His Reviews are based on his use of this gadgets and his opinions about them.
- Advertisement -

If you’re planning to buy an M.2 NVMe SSD to run demanding applications or move big amounts of data while maintaining your PC case uncluttered, the Samsung 970 SSD series is a great choice.

Samsung offers a vast range of SSDs, and their models, particularly for M.2s, can be somewhat complex. Companies’ specifications for sequential read and write speeds are notoriously unreliable, making determining which model is better and which is worse difficult. The lack of a regulatory authority to ensure accurate SSD speeds and overall specs are shown only exacerbates any issues involved with market research for choosing the suitable SSD for your needs.

In this post, we will analyze three different SSDs released by Samsung in 2019. In this Samsung 970 Evo vs 970 Evo Plus vs 970 Pro comparison, we compare the company-stated features, the actually tested specifications, and the price-value ratio, difference in design, and features of each of the three mentioned models. We will also check the speed of the different models using average user benchmarks.

Before we continue, we were unable to test all the available storage available in these three different SSD models. The test we took is only the 1TB variant of all three models.

Before we compare these three different SSDs, let’s take a look at the similarities of these devices.

To begin with, all three of these storage devices employ V-NAND technology, which is a non-volatile flash memory that employs layers of vertically stacked cells to reduce space, increase read-and-write speeds, and lower production costs.

Second, two of the three models have the same amount of endurance, which is measured in Terabytes Written (TBW). The EVO and EVO Plus 1TB drives were measured at 600 TBW, which is how many Terabytes you can write into the SSD over its lifetime. The 970 Pro, on the other hand, has a 1,200 TBW guarantee. To put it into perspective, you’d have to write 410 GB every day over an eight-year period to meet the 1,200 TBW restriction or 200 GB per day for the 600 TBW limit. Furthermore, all three SSDs come with a 5-year warranty, ensuring that you are protected for years to come.

Of course, all three SSDs have the same 2280 form factor, as well as PCIe Gen 3.0 x4 (vs. PCIe 4.0 NVMe SSDs) and NVMe 1.3, but they also include Samsung’s Dynamic Thermal Guard for maintaining consistent temperatures throughout, as well as Samsung’s “Magician” software for monitoring your SSD’s speed and performance.

After that, let’s see how each of these drives stacks up against one another in terms of promised performance versus actual performance, as well as price versus the value of these Samsung performance SSDs.

The Samsung 970 Evo Solid storage drive is one of the best drives you can get in 2022. Here’s how the three series compare in terms of storage and original pricing:

The speed of any SSD drive depends on the storage space and as well as the technology equipped with the device. If you’re looking for an SSD with a high read/write speed, 2 TB is the best option. The faster model has an excellent R/W speed. Consider the actual needs before investing in any NVMe SSDs, and then proceed to make a buy.

Also, if you are planning on storing more files on your PC, you might want large storage.

Before I summarize the Speed of the models, let check out their speed benchmark, to see which SDD is faster and which one performs slowly.

According to the Samsung 970 EVO Pro’s published specifications, it has a peak reading speed of 3,500 MB/s and a peak writing speed of 2,700 MB/s. So, let’s see if the price difference between the 970 EVO Pro and the EVO or EVO Plus is worth it:

The discrepancies, according to the benchmarks, are not that significant. 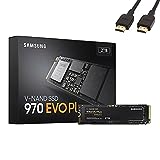 Despite Samsung’s claims that the EVO Plus is “up to 53% faster than the 970 EVO,” the differences in sequential read and write rates are minor, as shown in the chart.

The biggest difference appears to be in the average sustained write rates, which are calculated by measuring the sequential write speeds of large files over a 60-second period.

Is the EVO Plus worth the $30 difference in price? It is entirely dependent on your requirements. Not that much for the typical user.

Also, the Evo Plus outperforms the 970 Pro in some tests although the 970 Po claims to be more powerful in this series. The EVO Pro offers a 23 percent faster average sustained writing speed than the EVO Plus, but it falls short in almost every other way.

In comparison to the EVO Pro, one may argue that the EVO Plus is the superior SSD, even in terms of specifications.

When comparing the EVO, EVO Plus, and 970 Pro, I believe the Samsung 970 EVO offers the best overall value. For the average user, the differences between the EVO and the EVO Plus are insignificant. Of course, because the price difference is so minor, the EVO Plus is an excellent choice if you require faster-sustained writing speeds.

In terms of specifications, the Samsung 970 EVO Plus is the better SSD of the three. Despite its increased price, the Samsung 970 Pro does not appear to support it with the necessary higher-end benchmarks.

Each card has a different value depending on your usage, so if you’re looking for an NVMe M.2 SSD, be sure to look into them all.

If you're planning to buy an M.2 NVMe SSD to run demanding applications or move big amounts of data...
TV

LG CX Vs C1 OLED TV | Which OLED TV Should You Buy?

What To Do When You Crack Your iPad Screen?

Laptop Ports: Types, uses, and how to identify them

Why your laptop keeps shocking You and how to fix it